“I’m sorry, sir. You’re not allowed to record here.” I was told to put away my audio recorder by a grim-looking security guard. I had only started rolling tape for less than a minute before the guard appeared from behind the bushes, stopping my interview session. This was midday in KLCC Park, during a weekday when many would prefer to be indoors than out. I ended up interviewing my respondent in a nearby mamak where the waiters didn’t bat an eye to the presence of an audio recording device.

This minor incident brings forth the question of autonomy within both public and private spaces. What and who dictates the boundaries of expression and action within these spaces? Contrary to popular belief, the KLCC park is not public space. It is privately owned and managed by KLCC Properties. Over the years, there have been multiple complaints by the public of the park security harassing the public for reasons ranging from hanging out for “too long” or having a picnic. Parks like KLCC are private property open for the pleasure of the public. What this means is that the landowners can uphold their set of rules and regulations and evict those who break these rules at their discretion.

This similar logic appears during the Bersih rallies during the years of the Barisan-led government, where public property translates to government-managed. The Kuala Lumpur City Hall (DBKL) continuously rejected calls and permit applications to conduct the demonstration at Dataran Merdeka, which ironically is public property and funded for by taxpayers. For the Bersih organisers, there is significance for holding the rally and exercising public freedom of expression at a historically-significant location. The Bersih rallies drew Malaysians from all over the country to publicly call for free-and-fair elections, among other demands for good governance, equal rights and justice. It is clear that the Barisan government then attempted to block the constitutional right of Malaysians to exercise freedom of expression, first and foremost by denying an appropriate space to do so.

Although typically regarded as an invisible backdrop, public spaces are integral to democratic life. The insidious limitations of these spaces by authorities and corporations impact the citizens’ ability to organise and express. To understand the significance of spaces as avenues of public expression, we need to contextualise how these sites are operationalised. 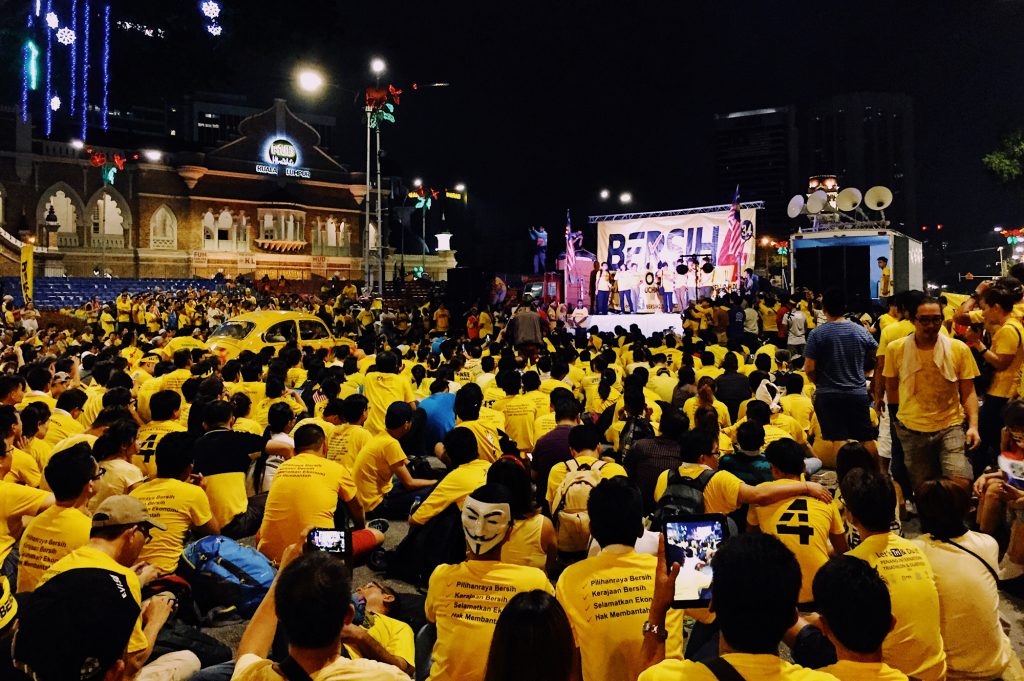 A contemporary example of public space for democratic expression is Cairo’s Tahrir Square during the 2011 Arab Spring. Cairo’s historical landmark was formerly the site of colonial resistance in the 1950s and provided a resounding echo for demonstrators against the authoritative rule of former President Mobarak. Demonstrators gathered for almost three weeks, swelling in solidarity through shared purpose and community organisation. Traditionally, mosques and marketplaces were also the site of spontaneous demonstrations against oppressive rulers, often sparked by influential preachers holding political differences with the ruling party. We saw this happen in the 98’ Reformasi protests in Kuala Lumpur when the public gathered at the National Mosque in Tasik Perdana after Friday prayers and made their way into the city, only to clash with state violence.

Public architecture and crowd control have become the preoccupation of modern governments. Urban planning provides governments with tools to manage democratic and public expression. Think of designated speaker’s corners where free speech is permissible within a confined, curated space but criminalised outside its borders. Or consider administrative capitals such as Washington D.C. or even Putrajaya; the vast spaces between buildings, as well as limited public access, restricts public organisation and movement and allows state apparatus such as the police or armed forces to crowd control easily. The same could not be said for organic urban spaces such as Kuala Lumpur that despite being condensed, is accessible and has landmarks that carry historical resonance, unlike Putrajaya that has no historical lineage and is an artificial organ of Tun Mahathir’s vision. This at least explains why Dataran Merdeka is always chosen as a site of public protests among Malaysians.

In The Language of Cities, Director of London’s Design Museum Deyan Sudjic dedicates a chapter exploring the politics of public spaces and city planning, specifically Canary Wharf, London’s privately-owned commercial and financial district. While open to the public, the Canary Wharf Group regulates the entire aspect of its property. Art performances, filming and recording, and rallies, among other things, cannot be held without prior permission from the landowners. Canary Wharf Group, a private corporation, effectively becomes the gatekeeper for community-organised activities despite reaping profits from the very people that patron, reside or conduct business on its site. Definitively speaking, the Canary Wharf Group’s accountability is to its shareholders and investors, and not strictly to those who rent out or occupy its modernist spaces. As such, even if individuals organise and petition against the private entity, the corporation has it within their right to deny or ignore demands up to their discretion.

Private entities have actively attempted to quell public protests through legal action. In 2011, KLCC Properties pursued legal action against NGOs who organised against the Peaceful Assembly Bill, citing that the rally posed a safety risk and interrupted “business operations” of KLCC’s tenants. On the same year in London, Canary Wharf Group did the same with Occupy activists who they claimed “interrupted” the day-to-day activities of their workers. The Occupy rallies were to protest against social and economic inequalities, primarily aimed at financial and capitalist groups who the movement identified as the source of socioeconomic problems.

The anecdote presented at the beginning of this essay is indicative of how corporations regulate the general public who could potentially hurt its bottom-line and reputation through public expression. And if “public” spaces like parks or squares are slowly eaten away or owned by private entities, where else do citizens have left to exercise their freedom to express?
This handover of control to corporations is a cautionary tale for Kuala Lumpur, whose public-owned spaces are slowly shrinking. Kuala Lumpur is slated with planned megaprojects that would terraform the metropolis’ cityscape. The city is envisioned to transform into a modern urban township, constructed and managed by private entities []. Spearheading this transformation is the Tun Razak Exchange (TRX) that was intended to be the city’s financial hub, but now faces roadblocks after being rocked by the 1MDB scandal. This urban transformation also sidelines local urban poor and middle-class, pushing them to the edges of the metropolis as high-rise city-centre residentials can only be afforded by those with enough capital. Corporations rarely develop for the middle and working class in mind, as with a drive through the city centre will prove.

The Public Right to Expression

The Bersih rallies provide an interesting look into the politics of public spaces. Dataran Merdeka, although managed by DBKL, is funded for by taxpayers. Unlike private properties such as KLCC Park, the accountability of DBKL is to the Malaysian public. And within reasonable means, the public has the right to peacefully assemble and express in these spaces. A counter-argument against public will is presented by Tunku Abdul Aziz, DAP’s former vice chairperson in the New Straits Times during the Bersih 4.0 rally []. He argues that although there the public has the right to express freely, the government also has its prerogative to regulate against what is deemed as threats to “peace and public security”. Tunku Abdul Aziz’s argument is flawed in that it completely disregards the space for public expression, especially views that are against the ruling authority. The right of public space and expression belongs to all of society, and not select groups.

Democratic maturity cannot exist when dissenting views are restricted instead of engaged. And certainly not when the state can decide the standards of “acceptable”. While the spaces of expression have moved to the Internet, online platforms function better to organise than it does in physically influencing public policy, especially one that requires a show of solidarity beyond digital numbers. This is how the protests at Tahrir Square came to be. Protesters used social media such as Twitter and Facebook to organise and disseminate information, but still required the locus point of public space to realise the 2011 Egyptian Revolution.

When it comes to public spaces, protestors in Kuala Lumpur have typically chosen nodes leading to Dataran Merdeka, i.e. Pasar Seni, Masjid Jamek, Jalan Tunku Abdul Rahman as well as other areas across the city such as KLCC or Padang Merbok. Although the then-Barisan government often redirected the protest venues to be held in stadiums, this move itself is no different than sequestered speakers’ corners where critical democratic views are contained within an isolated space, is ignored and leave no impact on the public.

For public demonstrations to be effective, their impact needs to be felt, heard and experienced. This is why visibility is important and is also why public spaces – where the fluidity of social interactions can grow organically is also crucial. Dataran Merdeka is attractive for this reason. It is easily accessible by public transport, sits at a confluence between the city’s financial and cultural quarters, has historical and symbolic resonance in the Malaysian narrative – and is the beating heart of the city. During Bersih rallies where human traffic swells and causes “inconvenience” to those moving within the city, it opens the opportunity to social interactions; for citizens to assemble, interact, understand and empathise with the democratic struggle of other Malaysians.

This cannot necessarily be replicated in public parks owned by private entities. Although KLCC Park sees thousands of visitors daily and is at the heartbeat of the city’s Golden Triangle, its space is a celebration of commercial capitalism and not one of democratic expression. The Petronas Twin Towers symbolises it perfectly, the pre-Pakatan Mahathir’s Vision 2020 for an industrial nation that pursues modernism at the cost of democratic engagement. Legal action was taken against protestors that protect corporate interests, but not necessarily those of the Malaysian public.

Democratic expression cannot be necessarily planned nor vetted for approval, lest it goes through bureaucratic and corporate censorship and risks its message being watered down. Democratic engagement, at its best – allows for spontaneity and organic fluidity. This is why public space is a right that must be jealously guarded by its citizens. And as these squares and parks for public gathering shrink in square feet to private developers – what then lies for the future of civic engagement in Kuala Lumpur, the beating heart of the nation?

Aziff Azuddin is a freelance journalist, photographer and researcher passionate in engaging, dissecting and documenting the Malaysian sociocultural landscape.